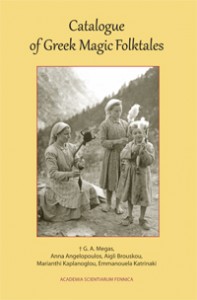 The Catalogue of Greek Magic Folktales comprises an epitome in the English language of the ‘Greek Catalogue of Magic Tales’ published originally in five volumes in the Greek language. The collected texts cover a period of more than a century of recordings (from the second half of the nineteenth century up to the mid-1970s) and geographically cover not only the entire Greek territory and Cyprus but also other areas where Greek populations live(d) and Greek cultures thrive(d) (Asia Minor, Pontus­, Cappadocia, Southern Italy). It was Georgios A. Megas, the eminent folklorist, who drafted the first (unpublished) catalogue, gathering and indexing all published and unpublished Greek folktale versions, so that the number of texts finally exceeded 23 000. A group of specialists continued for nearly 30 years carrying this project, consulting, classifying, and commenting G. Megas’ handwritten card indexes, and finally edit­ing this rich material, scattered in public and private archives.

May this Catalogue of Greek Magic Folktales, in its English edition, serve as a useful tool for future comparative research.