Folklore Fellows is an international network of folklorists, which promotes scientific contacts between researchers, publication work and research training. In striving to meet its objectives, Folklore Fellows invites outstanding and active researchers from across the globe to become members.

The early idea of the Folklore Fellows 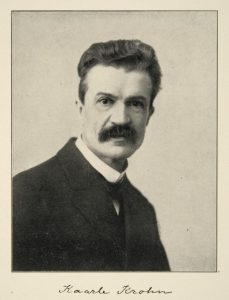 Kaarle Krohn, professor of Finnish and comparative folk-poetry research at the University of Helsinki, was a driving force in the foundation of the Folklore Fellows with Axel Olrik in 1907, and established an agreement for a devoted international publication series in 1908, which appeared as FF Communications in 1910.

Kaarle Krohn also took an active part in the founding of the Finnish Academy of Science and Letters in 1908. Krohn established the geographical-historical method; in his view it was necessary to gather and publish the products of tradition representing different genres, so that the origin, the directions of diffusion and the developmental framework of the phenomena of tradition could be explained. The Finnish Academy of Science and Letters formed a suitable institution for the establishing of the folkloristic research series.

Krohn, along with his colleague, the folktale researcher Antti Aarne, realised that comparative research that sought to explain lines of historical-genetic descent required fundamental information on the nature of the oral tradition of many parts of the world. The Dane, Axel Olrik, the Swede, C. W. von Sydow, the Germans Oskar Dänhardt and Johannes Bolte, as well as other scholars, also shared the vision. Regional Folklore Fellows’ groups were established in fifteen countries and reports on their activities were published in Folkore Fellows’ Communications until 1919.

The theoretical changes taking place after the Second World War put an end to the interest in comparative research between folklore variants of different countries. Intercourse between folklorists took place to an increasing degree in international conferences and through folklorists’ private contacts. Folkore Fellows’ Communications, however, continued its work, in a state of perpetual renewal in terms of content. Type indexes continued to be produced to meet the needs of archives, but the series extended its profile to include, in addition to folklore, works on ethnography, comparative religion and cultural anthropology.

The work of Folklore Fellows is revitalised

The shared fieldwork courses of the 1960s and 1970s, held for example in Scandinavia, along with the collaborative work undertaken with researchers from outside Europe, auguring the globalisation of the 1980s, showed that a closer dialogue than that offered by the great international congresses would promote folklore research. On Lauri Honko’s initiative, the four folklorist members of the Finnish Academy of Sciences, Lauri Honko, Matti Kuusi, Anna-Leena Siikala and Leea Virtanen, presented the Academy in January 1990 with new rules for the Folklore Fellows. The Academy approved the rules in November 1990, and in the same month the first new members were appointed and the international Advisory Committee was established.

The Executive Committee, at the heart of the Folklore Fellows’ Network, is composed of the Academy’s folklorist members. It is assisted in its work of electing members, of selecting the editorial team for the FFC series and of organising the summer schools by the Advisory Committee, made up of top international scholars. In addition to honorary members the society elects full and associate members, to which status all participants in the Folklore Fellows’ Summer Schools have been appointed. At present within the Folklore Fellows’ Network there are 10 honorary members,  98 full members, and 489 associate members. The international nature of the Network has been a factor in the election of members, in addition to their academic merit.