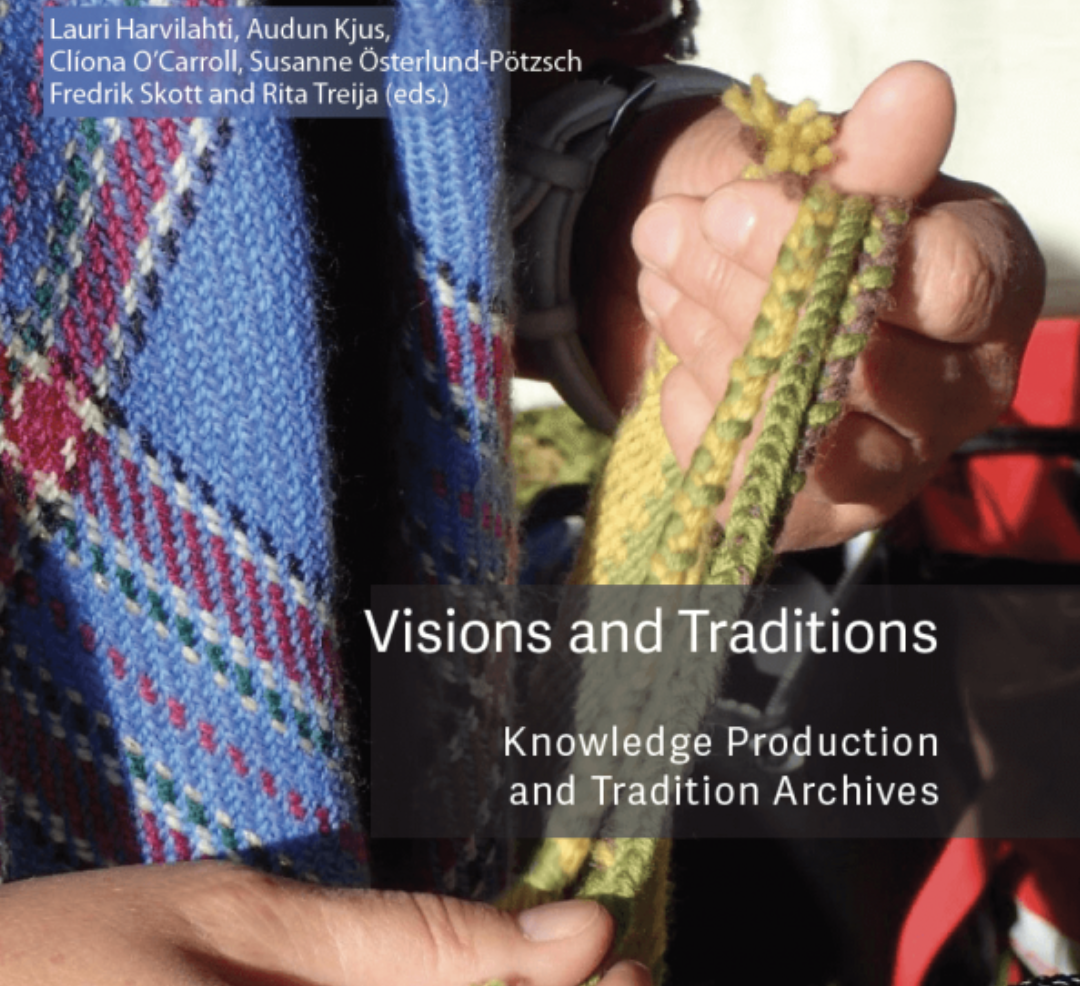 Winner of the 2018 Brenda McCallum Prize, for works of excellence and innovation that further the cause of preservation, organization, curation, or enhanced public access and use related to folklife archival collections.

Visions and Traditions contains texts that in various ways discuss the political, methodological and ethical aspects of how tradition archives have been – and are – involved in the production of knowledge.

The folklore studies of the 19th century, in the various forms they were performed, were concerned with not only imagining, but also sensing and experiencing the people. The early 20th century invention of the tradition archive, followed by the formations of folklore studies and ethnology as university disciplines, carried out fortifications, expansions and contestations as to who the people really were and how the people were to be seen and felt and experienced, and who had the authority to show us the people.

The disciplinary rumbles and departures from the late 1960s gave profound insights in how folkloristics and ethnology had contributed to the creation and strengthening of political identities, and left many folklorists and ethnologists skeptical about ever getting involved in identity politics again. The agenda of Herder, to assist the people in seeing and feeling and experiencing itself, for many became a shameful agenda. They sought refuge in purer forms of science, be it cultural history, linguistics or phenomenology. They would say: “To make the people visible is not our job. Let us leave them to it. But we will observe from safe distance.”

In the wake of the digital revolution and the new and powerful information technologies, people (not the people this time, but just people) are exercising great new abilities to make themselves seen and felt and experienced. Do people need tradition archives or folklorists in these endeavors? The editors of this volume suspect the tradition archives have qualities that are strongly in demand right now, and that folklorists are needed both as facilitators and for critical reflection.

We congratulate the authors and editors on a work the Committee agreed was forward-looking, cutting edge, and tightly focused on central matters of folklore and folklife archiving, history, theory, and practice. Committee members also saw the work as propelling folklore archives into the modern era of disciplinary shifts by claiming a firm foothold in academic conversations accessible to archivists, folklorists, and folklore-archivists. It also offered numerous interesting case study examples for contemplation.

1. Tilling the Soil – Words of Introduction

READ ON-LINE Tradition archives as memory institutions in the past and in the future: Foreword
Clíona O’Carroll

The contested identity of folklore archives: Folkloristics and archival studies at a crossroads
Maryna Chernyavska

2. Bringing the Harvest Home – Insights from Past Collection Practice

From personal letters to scientific knowledge: The creation of archived records in a tradition archive
Susanne Nylund Skog

Capturing the Christmas goat: The collection of folk customs in three questionnaires in the early twentieth century
Åmund Norum Resløkken

Dispersion, disorder and diversification: Paradigm shift at the Institute for Dialect and Folklore Research in Uppsala
Agneta Lilja

4. Seeds for Future Practice – Recent and Future Challenges for the Tradition Archives

New perspectives on archival shortcomings: A note on self-perception, history and methodology within folkloristics, ethnology and cultural studies
Eldar Heide

‘Who told that story?’ Archiving supernatural encounter narratives and the voices of the documents
Laura Jiga Iliescu

History in the making: The ethics and politics of net publishing
Fredrik Skott

Taking it slow, standing our ground, and apprehending the nature of ‘talk’: Audio archives and the digital goldrush
Clíona O’Carroll