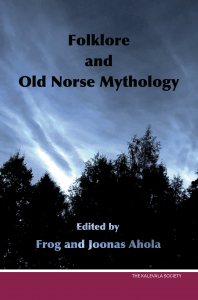 The present volume responds to the rising boom of interest in folklore and folklore research in the study of Old Norse mythology. The twenty-two authors of this volume reveal the dynamism of this lively dialogue, which is characterized by a diversity of perspectives linking to different fields and national scholarships.

The chapters open with a general overview of how the concepts of “folklore” and “mythology” have been understood and related across the history of Old Norse studies, which is followed by a group of chapters that discuss and present different approaches and types of source materials, with methodological and theoretical concerns. The interest in folklore is bound up with interests in practice and lived religion, which are brought into focus in a series of chapters relating to magic and ritual. Attention then turns to images that link to mythology and different mythic agents in studies that explore a variety of usage in meaning-making in different forms of cultural expression. The next group of studies spotlights motifs, with perspectives on synchronic usage across genres and different media, cross-cultural exchange, and long-term continuities. The volume culminates in discussions of complex stories, variously in oral traditions behind medieval sources and relationships between accounts found in medieval sources and those recorded from more recent traditions.

Individually, the chapters variously offer reflexive and historical research criticism, new research frameworks, illustrative studies, and exploratory investigations. Collectively, they illustrate the rapidly evolving multidisciplinary discussion at the intersections of folklore and Old Norse mythology, where the transformative impacts were recently described as a paradigm shift. They open new paths for scholarly discussion with the potential to inspire future research.

Read On-Line: From Theme to Book and Back Again
Joonas Ahola and Frog

Pre-Christian Religions of the North as Folklore, with Special Reference to the Notion of “Pantheon”
Jens Peter Schjødt

Conceptualising Continuity in the Christianisation: Towards a Discursive Approach
Sophie Bønding

A “Turn to Interdisciplinary Methods” in the Study of Old Norse Mythology and Religion: With a Case Study on the Distribution of the Cult of Freyr
Olof Sundqvist

Notes on historiolas, Referentiality, and Time in Nordic Magical Traditions
Stephen A. Mitchell

Women and Axes in the North: Diversity and Meaning in Viking Age Mortuary Practices
Leszek Gardeła

Wise Men and Half Trolls
Rudolf Simek and Valerie Broustin

The Giants and the Critics: A Brief History of Old Norse “Gigantology”
Tommy Kuusela

Phantoms of the Edda: Observations Regarding Eddic Items of Unknown Provenance in the Prose Edda
Joseph S. Hopkins